A bolt of bright light shot out. With St. Michael the Archangel in the lead, his red cloak flowing behind him, a choir of angels on either side of him, and completely surrounded by the angels and the brilliant light, the Queen of Heaven and Earth, of all the Angels and the Saints, my Mary, made her way back to earth one more time.
The children saw what they thought was a flash of lightning streak across the sky. They were sure it meant that rain was coming. But it was followed by complete silence. No wind, not even a breeze broke the calm and quiet of the moment. They were confused. There were no clouds in the sky. But it must have been lightning. They had better get the flock to safety. Another burst of light flew by them. They couldn’t move.
Then, gently, quietly, what seemed like a bubble of light rested on top of the holmoak tree in front of them, and Mary was there. The most powerful message Mary had ever given the world was beginning. Years later, Lucia described the scene,
“It was a lady, clothed in white, brighter than the sun, radiating a light more clear and intense than a crystal cup filled with sparkling water, lit by burning sunlight.”
To anyone analyzing the visits of Our Lady to earth, it becomes immediately obvious that she had an urgency this time that we’ve never seen before. On that first day, she gave these little children, who could not possibly understand, HER KEYNOTE MESSAGE OF FATIMA. Everything she wanted to communicate to the people on earth was touched on in that first apparition.
Mary opened the conversation. “Do not be afraid. I will not harm you.”

Lucia asked her “Where do you come from?”
Our Lady answered “I come from Heaven”. Then she pointed to the blue skies above.
Lucia asked her “What to do you want of me?”
The Lady responded “I have come to ask you to come here for six months on the 13th day of each month, at this same hour. Later I shall tell you who I am and what I want. And I shall return here yet a seventh time.”
Lucia asked “Will I go to Heaven?”
Mary smiled at her and answered “Yes, you will.”
“And Jacinta?”
“She will go too.”
“And Franciso?”
“Francisco too, but he will have to say many Rosaries first.”
Lucia then asked about two girls who had died recently in her village. One was in heaven, and the other in Purgatory, Our Lady told her.
Mary got back to the point of her visit quickly. “Will you offer yourselves to God, and bear all the sufferings which He sends you, in reparation for the sins which offend Him, and in supplication for the conversion of sinners?”
Lucia answered “Yes, we will.”
Our Lady continued “Then you will have much to suffer, but the grace of God will be your strength.”

Lucia described what happened next.

“As she pronounced these words, she opened her hands and bathed us in a very intense light; it was like a reflection coming from her hands, which penetrated our hearts to the depths of our souls, so that we saw ourselves in God, who was this light, more clearly than in a mirror. Then by an impulse which came from our hearts, we fell on our knees in unison, and repeated inwardly: “O Holy Trinity, I adore You. My God, My God, I love You in the Blessed Sacrament.”
Then Mary said, “Say the Rosary every day, to bring peace to the world and the end of the war.”
Enough! Our Lady wanted to tell them all that she would share with them over the next six months, but knew that she had better stop now. After all, this trio consisted of a 10 year old, an 8 year old, and a 7 year old. How much could their little minds absorb?
The Lady from Heaven slowly ascended. The bubble of light enveloped her; she moved slowly to the east, back to from where she had come, and finally out of sight. The children watched until there was not a sign of her left in the sky.
On their way back to their homes, they made a pact that they would tell no one about what they had seen. There was no way that this would happen, however. They were so filled with joy, they were about to burst. Lucia was able to maintain the discipline they had vowed to keep. Francisco went off by himself to try to sort out what had happened. Keep in mind that on this first apparition, he did not see the Lady. He saw the light, and knew that something important was happening. 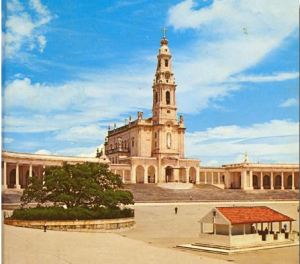 On the way home, he heard Lucia and Jacinta talking about the most beautiful lady, but he had not seen anything.
Jacinta, for her part, might just as well not have made any promise. First off, she looked for her mother, who had not as yet returned home. Determined to tell her as soon as she saw her, Jacinta waited became the brunt of very cruel jokes. Adults, whom they had looked up to, yelled at them, and cursed them. The locals were annoyed with the visitors from all over Portugal, who were descending on their quiet village, and creating such a commotion over these “little brats”.

Lucia went through a particularly bad time. Her Parish Priest had a meeting with her. He all but convinced her that it was not Our Lady from Heaven who was visiting her, but the devil. For a ten year old, whatever a Parish Priest said was akin to Gospel Truth. This little girl didn’t have the inner strength of Bernadette at this time in her life; but keep in mind that Bernadette was older than Lucia at the time of the Apparitions in Lourdes. Also, these little ones were being given a series of the most serious messages Our Lady had ever given the world; therefore, it was understandable that the attacks would be greater.
As the time for the July 13 meeting approached, Lucia had decided not to go back to the Cova da Iria. She was convinced she was being assaulted by the devil himself in the form of this beautiful lady. The other two couldn’t understand Lucia’s logic. For them it was impossible that it was anyone other than the Queen of Heaven. So much good was going on at the Cova. It was a contradiction of what satan would have wanted. But they couldn’t budge Lucia. Brave little Jacinta said that if Lucy didn’t go, she would speak to the Lady, though she was frightened out of her mind.

Go with us on Pilgrimage to Fatima Spain and Lourdes in June of 2017
Get the Details here – http://www.bobandpennylord.com/pilgrimage.htm

Apparitions of Mary, Many Faces of Mary | Tagged: Our Lady of Fatima |

Celebrating the Gift of Mary on her Birthday Sept 8

The Gift of Mary

My most precious family; this is an exciting and important month for us Catholics, especially those who love Mary.  It’s something that could pass you by, because it’s not promoted as much as other things in our Church.  That’s why I’m just here to remind you of it, because I love you.

Next Tuesday is Mother Mary’s Birthday.

Our Lady has given us many gifts during our lifetime.  She has been there for us in many ways; she has worn many faces for us.  She is our Mother; she is our friend; she is our confidant; she leads us to her Son Jesus.

In our book, The Many Faces of Mary, we share with you just some of the miraculous apparitions she has made here on earth.  She came to a little illiterate girl in Lourdes, France and proclaimed her Immaculate Conception.  From that time until this, she has given us miracles at Lourdes, at the Baths, and at the Blessing of the Sick.

In Paris, at the Chapel of the Miraculous Medal, we told you about how Our Lady sat in a chair with St. Catherine Labouré kneeling, her arms in Our Lady’s lap.  Our Lady gave us a gift which will be with us forever. She said:

“But come to the foot of the Altar.  Great graces will be poured out on those who ask for them.”  There is a catch.  You have to   ask for them.  Our Lady’s hands had rings on each finger.  But rays only beamed down from certain fingers.  She said to Catherine Labouré, “the fingers with no rays are graces that have not been asked for.”  The gifts are there.  You have but to ask for them.

It’s so much like the gifts we received at Confirmation, the Seven Gifts of the Holy Spirit.  They’re wrapped up like Christmas presents, sitting under the tree.  But you have to    take them.  When Penny and I taught Confirmation Class, we walked around the room with a $5 bill, offering it to the students.  Everybody thought it was a trick, and didn’t take it, until one brave soul took it.  He said “Thank You.”  I said “You’re welcome.”  Then everyone in the class was upset that they hadn’t taken the gift.  When was the last time any of us used the Gifts of the Holy Spirit?  Who even knows what the Seven Gifts are?

Go up to the foot of the Altar.  Take the gift from Our Lady!

I think you’ll agree with me that we were all given tremendous gifts by Our Lady during our lifetime. And she never stops giving.  But now it’s time to give back.

Next Tuesday, September 8, is Mary’s Birthday.  Honor her.  Go to Mass.  I know it’s not a Holy Day of Obligation, but do it anyway.

Don’t let the world get in your way.  She is your Mooother.  She has given to you.  Give to Her.  Or She will get you.  Just sayin…  I’m telling you this because I love you.  Mary loves you.  Love her back.

And FYI, the next day is my birthday.  So while you’re at Mass on Mother Mary’s birthday, pray for my special intention.  We love you!