Saint Bernardine of Siena brings Calm among the Chaos

Saint Bernardine of Siena lived in a chaotic time somewhat like our own times.

He went around the city of Siena in Italy and placed the symbol of Jesus in the Holy Eucharist IHS all over the city.  To this day you will see that symbol over the threshold of the buildings there.

He encouraged the people of Siena to be proud of their Christian heritage and to show it outwardly. He was bringing the calm truth to the chaotic world.
Brother Joseph

Now read what Bob and Penny said about him. 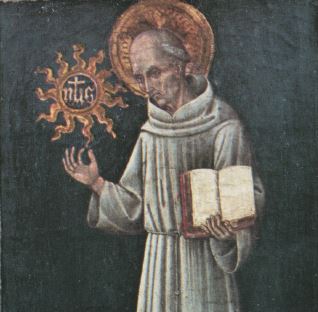 As the need arises, the Lord sends His messengers to proclaim His Word. Italy and the rest of Europe were in sorry straits, with morality and piety practically non-existent. And God sent Bernardine! His message clear, his reputation spread and penitents converged on him, lining up to have him hear their confessions.

We have always said people are innately good, made in God’s Image. There is a hunger to return to God and His Love. Bernardine’s call to reform touched every walk of life. He not only influenced members of the Church; but lawmakers as well. Reforms of St. Benedict were included in their laws, under the title of Riformazioni di frate Bernardino.
No one was excused from his preaching. He called for reform from the common man as well as from people in high places, in one instance, boldly calling to task the Duke of Milan. He brought about change! His message was so powerfully accepted, the people lit bon fires and cast their sins and worldly temptations upon them, as a firm resolve to live better, more holy lives. One of the scourges of the time was usury – the practice of exacting exorbitant interests, often resulting in the inability of the lender to pay, losing his home and all his worldly goods. To respond to this evil, Bernardine founded a society of beneficial loan societies called “Monti di Pieta.”
Although he preached relentlessly on reform, Bernardine spoke with the gentle, compassionate Heart of Jesus and that of his father Francis. Peace was his primary focus, and toward that aim, he journeyed to the far corners of Italy reconciling warring factions like the Guelphs and Ghibellines. The Guelphs were members of a political party that supported the authority of the Pope against the aristocratic party of the Ghibellines. The Ghibellines, in contrast to the Guelphs, supported the German emperors in Italy, who, hell bent on stealing all the Papal lands from the Papacy, challenged the authority of the Pope. Where all modes of diplomacy and compromise failed, Bernardine with his preaching of Peace and Love succeeded, bringing about reconciliation among the two warring factions.

Bernardine carries the symbol of Jesus 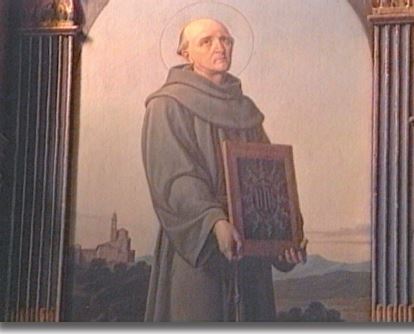 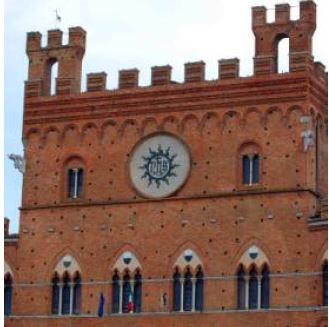 Now, there was a craftsman, in Bologna, Italy, who painted playing cards. Bernardine’s sermons against gambling caused him to lose his primary income. He was furious! But his anger soon turned to joy, as Bernardine persuaded him to paint the emblems IHS on plaques. In place of his earlier pursuit of creating cards, that were instruments of temptation, he now was painting day after day, the emblem of the Holy Name of Jesus, consequently becoming an instrument, bringing the Lord’s presence into the midst of a worldliness that would blot Him out. These powerful signs of hope and love spread and spread. And then because God is so generous to those who honor Him, with the huge demand for the plaques, the craftsman soon recouped his original assets and then some.

I have a suggestion that would greatly help you and us.

Purchase some of the booklets on the Life of Saint Bernardine of Siena by clicking here http://www.bobandpennylord.com/St_Bernardine_of_Siena.htm

and sharing them with your family and friends or leave them some place where others make pick it up.

I am reminded how the Monks at Saint Maximilian Kolbe’s monastery near Warsaw, Poland worked feverishly before World War II printing and distributing booklets with information on our Faith.  They distributed millions of them and after the war many folks came forward and told others that those booklets helped them to get through the War years.

I believe we are also called to do our part to distribute the calming truth among our world of chaos.

Please help us and help others.

This entry was posted on Friday, May 20th, 2016 at 11:50 am and is filed under Saint Bernardine of Siena. You can follow any responses to this entry through the RSS 2.0 feed. You can leave a response, or trackback from your own site.