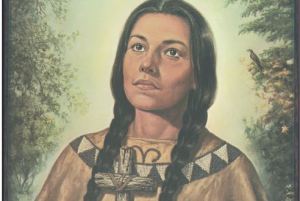 Family, we went to Canada to make a program on the North American

Martyrs. There are two shrines, we found out, one in Ontario Canada, and

one in New York State, near Albany. Penny felt that the program could not

Ossernenon, which is today Auriesville, near Albany. The expense was going to be high, and we had just spent a great deal of money financing the trip to all the Shrines in Canada. So, we as a community prayed on it, and Penny decided that we were going to New York State.

The custodian priest there at Ossernenon was very helpful, and told us that although the Blackrobes pulled their evangelization efforts out of those two areas after the deaths of St. Isaac Jogues, St. René Goupil and St. John Lalande, there was one bright light that rose up from the blood of the martyrs, Kateri Tekakwitha, who has since become the first Native American Saint. She was born at Ossernenon, and lived a peaceful, joy filled life there, being taught about Jesus until a smallpox plague ravaged the village. It took the lives of most of the villagers, including Kateri’s mother and father, and disfigured her for life. Her face was pock marked and her eyes almost blinded. She walked the rest of her life in a bent position, trying to see where she was going.

The chiefs moved the camp away from Ossernenon because of what had happened. They settled in a village called Caughnwaga (by the rapids), which is today called Fonda, New York, about a mile from Auriesville. We went there to make the program on the little Lily of the Mohawks, as she was called.

Now, because we had not planned on making this program, we had not contacted the shrine for permission. They had no idea we were coming. We went to the gift shop to ask for the priest in charge, and told them why we were there. Naturally they were in a dither, because they did not feel the place was ready for TV cameras. However, the Lord felt it was just the way He wanted it. The priest was another story completely. He was a very young Franciscan, Fr. Jim Plavcan. He didn’t believe for a minute anything we told him. We talked about Mother Angelica. We even talked about Fr. Groeschel, who was a Capuchin Franciscan from New York and was also on EWTN. He said he would check on all these things. He agreed to be interviewed on camera with us, which made for what turned out to be a good half a program.

At the end, our priest, Fr. Jim told us that Kateri fled this camp when her uncle, who was the chief and took control of her life when her parents died, refused to allow her to learn the Catholic Faith. She was baptized here clandestinely, but then left in a boat with a group of other believers who went to what was called the Village of Prayer in Kahnawake, an area of Montreal, Canada. Our program wouldn’t be finished until we went to Canada. Oh, a

P.S. on the priest, Fr. Jim Plavcan. He sent us a letter a few weeks after we had been there, apologizing for doubting us and who we were. He had checked us out thoroughly and his face was red. He ended his letter with a beautiful thought. “Keep up your prayer life. You can’t give what you don’thave.”

A sad PPS – He was traveling to New Mexico to a convention for the Canonization of Kateri Tekakwitha. He was traveling by bicycle. He was run off the road by an 18 wheeler and died. He was very young. We dedicated our program to his memory. 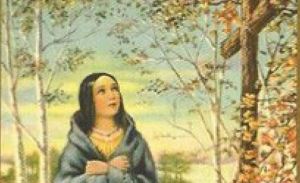 We had to wait a few years before we could go back to Canada. However, our wait was well rewarded. We met a French or French Canadian monsignor who was really pushing for the Canonization of Kateri. By this time she had been declared Beatified by St. Pope John Paul II. His name was Msgr. Broussard. He was very helpful. We were able to interview him for the camera, which was very helpful for the program. He shared something with us which we later wrote in our biography of Kateri. He said:

“As Kateri was leaving New York for the voyage to Kahnawake, an interior turmoil was going on. She was leaving her homeland of twenty years. She loved the Mohawk Valley, so breathtakingly beautiful. She would miss the river and the streams. She would even miss her family, although they had been so cruel to her. She thought about all that, and then she thought about what she would be receiving in return. She just turned her whole life over to Jesus.”

When she arrived at Kahnawake, she brought letters from the priest who had baptized her in New York. He had also given her instruction for First Holy Communion. She was not able to receive in New York. The priest, Fr. Cholenec, read the letter addressed to him.

“Catherine Tekakwitha will live at the Sault. I ask you to take charge in directing her. It is a treasure that we are giving you, which you will soon realize. Guard it well and make it bear fruit for the glory of God and the salvation of a soul which is certainly very dear to Him.”

Kateri arrived at the mission in October 1677. Some months later, in the winter of 1677, Fr. Cholenec wrote his own observations.

“There is one who walks with a limp; she is the most fervent of the whole village. I believe, and though she is cripple and always sick, she does some amazing things.”

Kateri lived a peaceful, joy-filled life at the mission. She received her First Holy Communion, which was the highlight of her life. She experienced some difficulties at the village, but the Lord protected her from any problems.

Kateri moved through the levels of mystical life. She had gone through the first, personal special relationship, then the level of purging herself, shedding herself of anything that was not of God, or would not lead her to God; and finally the level of union, unity with God, a mystical marriage with Jesus.

From that level, there was only one place to go, Paradise.

She was an innocent girl. Everyone was aware of that. She was also a very sickly girl. From the time of her Smallpox attack, she never quite recovered.

From the middle of the summer of 1679 to Holy Week of 1680, she began to suffer terribly. She kept a smile on her face, and continued her devotions.

However, around Easter of that year, it was obvious to all that she was preparing to go to the Father. On Wednesday, April 17 1680, she gave her soul to God.

Miracles began to happen immediately. Although they were chronicled, they were not submitted to the Holy Office. It took until June 22, 1980 that Pope St. John Paul II beatified her. On October 21, 2012 she was canonized by Pope Benedict XVI. She was the first Native American Saint, truly fruit of the

blood of the Martyrs. Praise God. 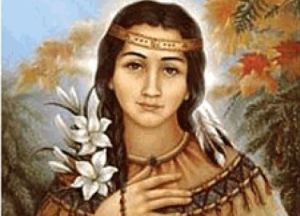 This entry was posted on Monday, July 13th, 2015 at 6:04 am and is filed under Bl Kateri Tekakwitha. You can follow any responses to this entry through the RSS 2.0 feed. You can leave a response, or trackback from your own site.